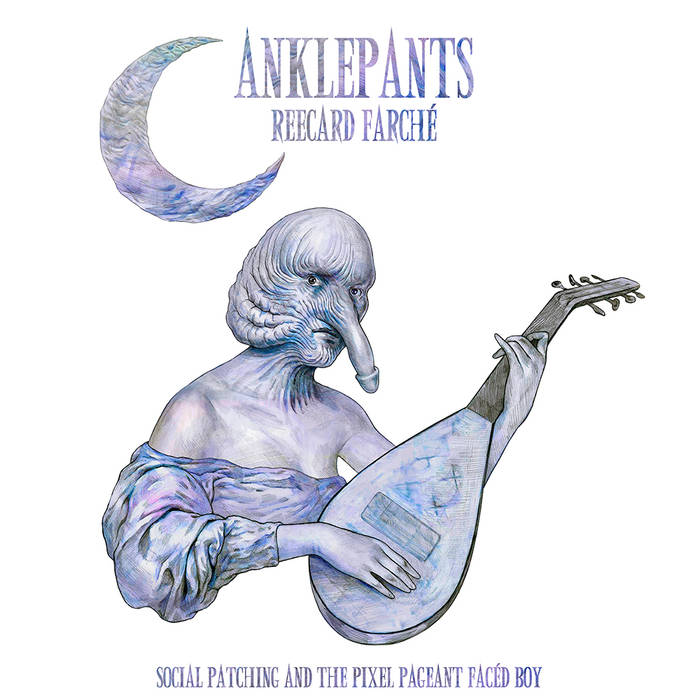 Anklepants is an artist whose act demands a reaction from all those that witness his presence, the hysteria that surrounds him has gained huge momentum since the release of his 12” vinyl 'SPEEK You Little Re-facéé' on Love Love in 2013, propelled by a European tour last year with Otto Von Schirach and his sensational Boiler Room set. The 'SPEEK You Little Re-facéé' vinyl single served as a taster of what was to come with its 2 bombastic extended cuts (both also featuring here), and now, having sown the seeds of his message around the world, his debut album has arrived on Vinyl and CD. Packed with live classics and brimming with his frenetic brand of mutated, electronic, anti-pop; this album marks the second step in Anklepants' world domination. The CD version of this album comes with a 2nd disc containing reworkings of Anklepants' original tracks by other artists similarly involved in carving their own paths through the modern übergründé.

'Social-Patching-And The Pixel Pageant Facéd Boy' opens with the instantly ball-grabbing 'ILIKEYOURFACEHEADSHOESANDDICK' as a strong statement of intent – a track that lyrically predicts opinion, especially coming into its own in a live situation with its cathartic breaks and bipolar switches. Where the opening track effectively introduces Anklepants to the listener, the second track - 'The übergründé' provides a backdrop to the rest of the album, demonstrating his compositional prowess and referencing a number of musical phenomena. Starting out as a staggered beat-mash straight from the circus, the track escalates with metallic bass and atmospheric bursts before breaking down into what can only be described as breathtaking 80s-infused pop of 'Memorising the Names...', with a guitar riff that recalls David Bowie in his prime.

On the 'Reworkings' CD we find a variety of Anklepants' contemporaries from across the globe providing their own ammunition for a sparkling assault on the ears. Ten prime cuts straight from the underbelly of the übergründé, 'Reworkings' includes tracks from pioneers, raconteurs and magicians some of which teeter on the edge madness whilst others go boldly into the galaxy of uncharted sound. From acid techno and caustic jungle to spoken word ditties and opiated, shifting soundscapes, this CD not only provides a contextual backdrop for 'Social-Patching...' but also expands on the concept, as masters of their craft wield their esoteric technology to produce some of most intriguing, creative and abstract remixes of the bizarre creature that is Anklepants.